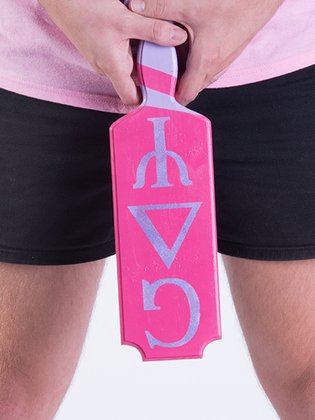 Gamma Alpha Upsilon boys have a brotherhood like no other! From late night wine chugging to their secret initiation rituals and steamy paddling sessions, they’re a lot like the other frats on GREEK row. Celebrate “true brotherhood” and don the uniform of a common frat boy. G.A.Y tees parody hazing rituals and merge them with pornography.

Joey Donatelli is interested in combining pre-packaged products with emotional ideology and merging the relationship between the product and consumer. Joey's work discusses queer culture as it relates to gay men, sexual power, identity, and the concept of the toy. His work often looks inviting from afar but often reveals adult themes as the viewer explores it.